My aim is to create a building that attracts and distributes visitors (locals and visitors) in harmony with its surroundings, providing a lasting, local experience.

My concept is to summarise, project and add to the experience of the place in the form of a building. The impressions created by this can also be an incentive to explore and get to know the place or the city.

The design tool is the spatial representation of the sensations evoked. The spaces (in this case staircases and levels), made up of sensations, are grouped together in a vertical array. The upward expansion allows the spatial sensations to be ‘compressed’ into as small a footprint as possible, and creates a pair of mutually reinforcing opposites as a break in the horizontality that characterises this part of the Banat.

The end points of the levels always provide a view of the location that evokes the particular atmosphere. However, as these are subjective perceptions, this type of building design can be seen as a design crutch rather than an instruction for use. The impressions created by the spaces are always the product of the individual and may therefore differ.

This is coupled with a ground-floor building block that encourages a variety of experiences, facilitated by the rental shop and the café/tea room.

The chosen location is Jimbolia, a town with a rich industrial history in Romania, close to the Hungarian-Serbian-Romanian triple border. One of the traces of its brick-making past is the group of lakes that have formed on the site of old clay mines. My concept assumes a linear approach, as the building can also be a starting/ending point for experiences. The end point of the peninsula, which extends into the largest lake and resembles a ‘hugging arm’ in plan view, perfectly fulfilled this condition.

The longitudinal side of the pair of buildings could be interpreted as a continuation of the path leading to the shoreline, with the vertical compression point at the tip of the peninsula as its destination. The ground level block is a slight dividing line between the larger lake and the naturally separated, more tangible part of the lake. The building opens up towards the latter, and the intention is to use this smaller body of water for recreational activities, so that the larger pond can be preserved for the various species of birds that nest and seek refuge here. At the same time, visibility and accessibility are not obstructed by the ground floor block.

The “experience compressor” is a tall vertical column of stacked spaces of space impressions. The notches and openings that are created on this level always communicate with the site that is intended to give back (or complement/add to) the experience. In practice, this means that if, for example, the floor in question wants to resemble the experience in the reeds, the opening or cut-out in the building will also be created in this direction. This method also generates a varied crowd due to the multiplicity of experiences, the spatial dispersion and the central location of the block.

The proportions of the associated ground level array are nearly identical. It can be understood as a ‘knocked down’ counterpart of the vertical building. This forms a ‘fabric’ articulated in a flat-roofed feature with distinct bays, opening out and permeable towards the two lakes. The two building masses are connected by a canopy, which also defines the route of the access.

The industrial ‘artefacts’ found on the site do not seem alien in this artificially created natural environment. The proposed building continues the series of ‘found objects’ with its object-like appearance, making it an integral part of the site, identifying with its identity.

The horizontality of the lowland and the verticality of the building are a pair of opposites that serve to express and amplify both qualities at a higher level, creating a symbiosis. This character also draws attention to the presence of transitions between the two extremes (total horizontality – extreme verticality) by framing them. 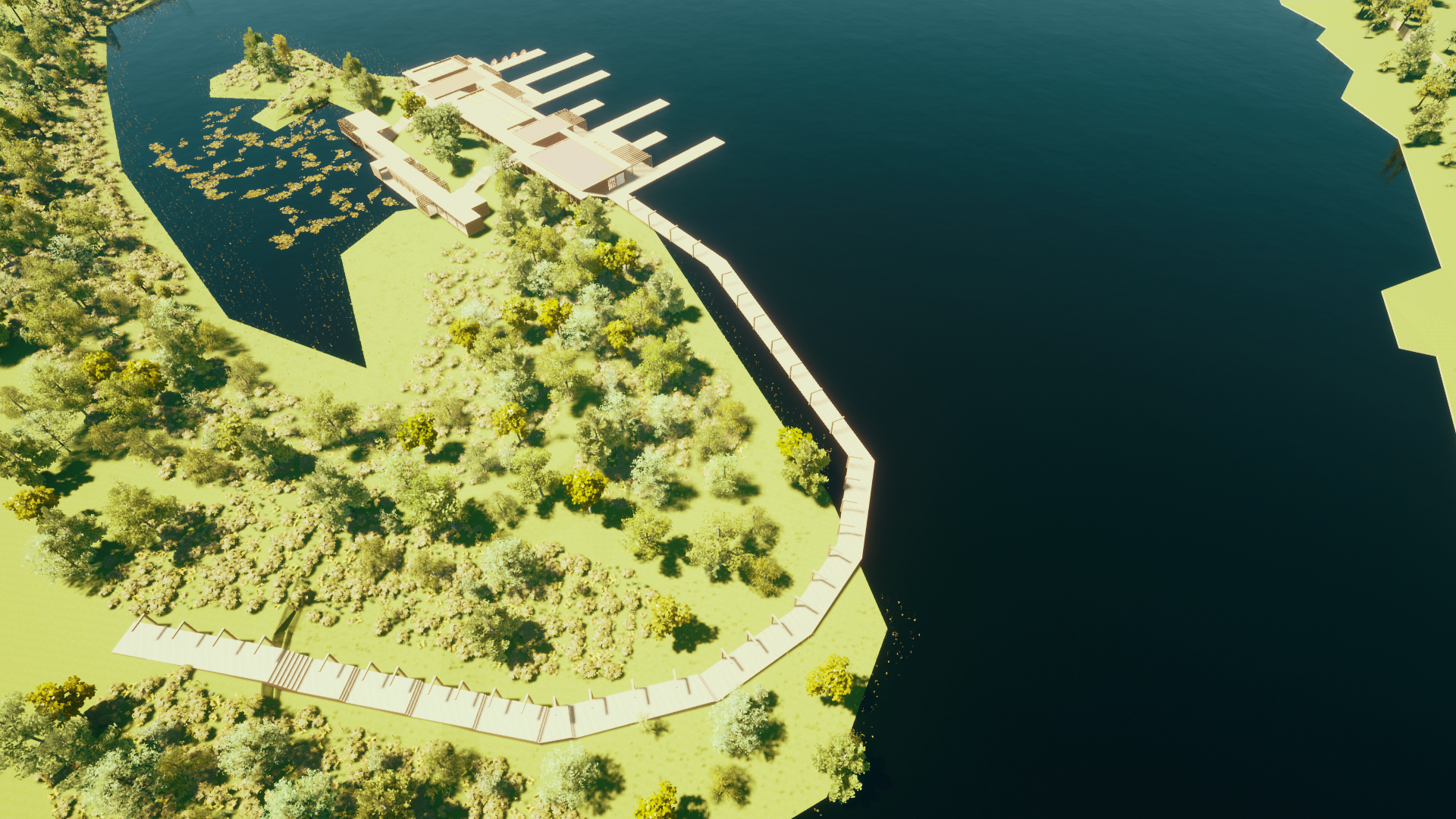