Contemporary Approaches in Working with the Brick

Architecture is the transformation of a worthless brick into something worth its weight in gold.” – Alvar Aalto

Brick is one of the oldest known building materials used for more than 9,000 years. From the very beginning of use until the digital age, brick is still one of the favorite materials used by architects. As is the case with other building materials, brick has peculiar material, structural, manufacturing and design logic. Understanding the basic ingredients of brick logic can turn architects into magicians. As we live in the age of digital technology, we may wonder how we can use the logic of thinking about brick to help increase our design and manufacturing skills.

A digital brick could be the answer to such a question.

The main topic of the Digital brick lecture are contemporary approaches in working with the brick. The concept of digital brick can be understood as a new way of understanding the logic of brick, which arose from the application of digital technologies in creating new ways of brick-thinking. Through several examples, new ways of thinking through new materials, structural, production and design logic are further explained.

Material logic can be described as a common way of understanding the mechanical and perceptual qualities of a material. An example of the usual way of thinking about materials is that wood cannot be bent and shaped by hand, as is the case with rubber. Such a way of material logic was a common way of thinking. However, digital fabrication technologies have influenced changes in how we think about the materials. The Dukta product is one of the examples of how wood can get elastic and textile properties by applying CNC cutting technology with a unique incision process. The different incision patterns can open new horizons in using flexible wood due to new features like transparency and sound absorption. In a similar way, robotic production of parametric brick walls radically changes our perception of brick bond patterns. Gantenbein Vineyard Facade, (Gramazio & Kohler, 2006) is the first realized project that changed our perception and tectonic properties of brick walls, changing the way we think about brick bonding. From then, meny other projects including The brick installation “Structural Oscillations” for Venice Biennale (Gramazio & Kohler, 2007) or Administrative Building Textilverband in Münster (Behet Bondzio Lin Architekten, 2018) reflects different material logic of brick that more resembles to textile surfaces than flat brick walls.

Structural logic of brick reflects its mechanical properties. Brick masonry has good compression strength but is very weak in tension because it is composed of two different materials, brick and mortar and the bond between them is weak. For this reason brick masonry is expected to resist only the compressive forces. Ancient builders were familiar with these properties of masonry structures and brick has been used for centuries as a material for making vaults and domes. Historically, hanging models have been used to design vaulted structures. Consequently, cylindrical and rotational surfaces derived from funicular curves prevaled as a form of brick shells. In the last two decades, the rise of computational design and digital form-finding methods such as Thrust Network Analysis (TNA) have enabled a new language of doubly curved brick shells. To explore the design space of funicular shapes, the TNA method was implemented as an interactive, digital tool, providing the user with a high level of control over the force distributions in a funicular network, in order to accomplish a certain design goal. The new digital form finding tools such as TNA based RhinoVault or spring-relaxation based Kangaroo-Grasshopper, significantly change the way how we can design structurally informed brick shells in architecture.

Manufacturing logic pertains to common production techniques used in the process of construction and assembly. Brickwork techniques may be found in such ancient locations as Çatal Höyük in Turkey (70 century BC), Sumerian Ziggurat of Ur in Iraq (21 Century BC), or Mohenjo-Daro in Pakistan (25 Century BC). Brickwork techniques and masonry techniques have not had significant changes until the last 2 decades. Apart from some isolated regional techniques such as catalan vaulting that was frequently applied all over the Mediterranean, primarily in Spain, bricklaying was based on simple rules of brick bonding and skilled masonry workers. Novel manufacturing processes based on digital technologies or material processing significantly change brickwork logic. Research experiments started at Block Research Group (2010) continue exploration of manufacturing processes based on 6 centuries old techniques such as Catalan vault and combine it with innovative form-finding, falsework and construction methods in order to manufacture intriguing masonry vaulting with complex geometry. The new design and efficient construction approaches that expand language of shapes, use less material and falsework for construction than traditional approaches, has inspired many other projects, of which Bricktopia in Barcelona by Map13 and library for a school in Kopargaon, India by mumbai-based architecture firm sP+a is the best known.

The Manufacturing paradigm has also been changed in the field of assembly process. Started with bricklaying walls with industrial Robots at ETH Zurich by Gramazio and Kohler (2006), innovation in assembly process continues with flying robots for the installation Flight Assembled Architecture (Gramazio and Kohler and Raffaello D`Andrea 2011 ) and Augmented Bricklaying which reintroduces craftsmen into a digital fabrication process with the aid of augmented reality fabrication interface (Fologram, 2019, Gramazio Kohler Research and Incon.Ai , 2019 ). While all previously mentioned digitally based manufacturing process were based on standard cuboid brick shape, Research experiments Polybrick (Sabin Design Lab 2014) and TerraForma (IAAC 2017) investigate opportunities of using interlocking 3D printed components that has non-standard shape in order to create brick walls with increase structural and thermal performance through unique shape and cavities inside the brick. Interlocking shape of brick contributes better seismic behavior and mortarless installation.

Design logic is based on the application of design tools, models of thinking and models of representation in order to solve specific problems. For centuries design logic in architecture was connected to the use of thinking models and tools for paper-based representation as well as making physical models. In the second half of XX century early CAD systems tried to mimic already known drawing techniques and attempt to depart from paper-based media by speeding up and augmenting the design process. While the algorithmic way of thinking was already known to some academic circles of architects, engineers and artists, revolution in digital design thinking was initiated with the development of the digital manufacturing process. Novel manufacturing processes were based on delivering digital CAD files directly to CNC machines, opening new possibilities in  creating unique custom shaped objects that can be assembled with great precision. During the 90s Frank Gehry and Nikolas Grimshaw were among the first architects that recognized the potential of novel manufacturing processes used in aircraft, automotive and shipbuilding industry and they applied in architecture by creating parametric models to create a family of unique forms digitally controlled by geometric parameters and constraints. First parametric tools made a shift from drawing the single shape into the diagram that represents a family of shapes. New algorithmic based tools also made a shift from (brick) module to parameter, from element to component, from composition to rule.

Previously mentioned examples already showed shifting logic of material, structure and manufacture towards digital brick as it is the case with many other numerous examples. As an example of how we can think digitally with the brick patterns, an online 3D parametric tool is designed showing how we can design in a seconds, different brick patterns without any additional software by using an online parametric tool. More can be read here https://triplex-confinium.eu/2021/09/23/tc-wall-online-3d-tool/ 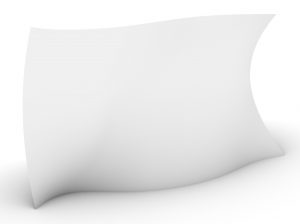 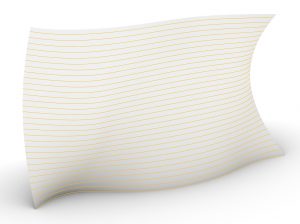 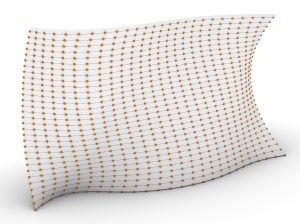 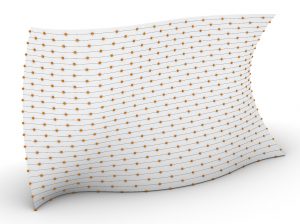 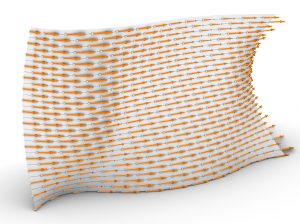 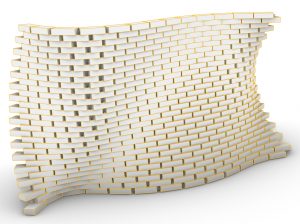 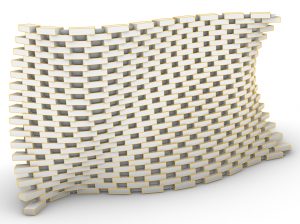 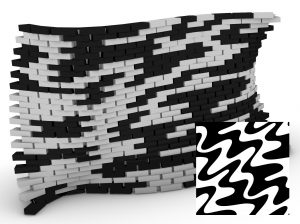 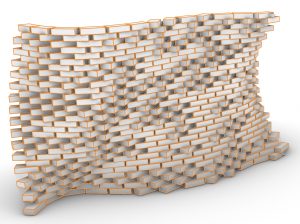 This workshop utilizes the potential that digital techniques and technologies have when applied to the scope of brick laying. Contemporary interpretations of centuries old staggered brick stacks have allowed for the potential to implement old ideas and automate them to generate different variations following the same logic.

The basic method behind this approach starts by defining the desired surface which is going to be populated by bricks. The surface can be doubly curved, but maintain the top and bottom edge curves as planar and parallel to the horizontal plane (Fig 1a). Once the surface is generated, it is approximated through a set of parallel curves, which are located at a specific distance from one another, starting from the bottom (Fig 1b). The distance is set as a variable, determined as the sum of the brick height and the joint thickness. Afterwards, the curves need to be approximated through a set of points, which can be used later on for brick placing. The points are located at a specific distance from one another. The distance is also a variable, determined as the sum of the brick length and the joint thickness. If these points were to be used for brick positioning, the staggered nature would not exist, given their uniform grid like nature. That is why the distance is divided by two to produce double the amount of points, from which a subset of points can be used for the odd and another subset for the even rows later on. In order to ensure that the bricks have a staggered stack and to accommodate for the difference in curve length, which can occur with doubly curved surfaces, each curve is approximated by the same number of points. The number is chosen to be the minimum amount of points produced as the result of the division process (Fig 1c). Afterwards, every odd curve is chosen and every odd point on it and every even curve is chosen with every even point on it, thus generating a grid of points that are staggered (Fig 1d). Once the points are determined, it is necessary to generate the user coordinate system (UCS) for brick placement later on. In order to produce this, each point is evaluated in reference to its parent curve and a set of respective tangent vectors t is generated (Fig 1e). These tangent vectors are then rotated around the vertical axis positioned in each of the respective points to produce a normal vector, n . Using the point as origin and the two vectors, t and n, as an axis, a UCS is generated for each brick. The bricks are generated so that the origin is located at the center of the bottom brick side (Fig 1f). By changing any of the starting inputs, the shape and form of the surface, the brick or joint dimensions, it is possible to produce instant variations of the design (Fig 1g). In order to elaborate on the approach, a guiding image pattern can be utilized as an input, which can govern the color of the bricks (Fig 1h) or its rotation (Fig 1i).

With this approach, a myriad of different solutions can be generated, where the fabrication process depends on the designer criteria and preferences as well as the structural stability of the chosen solution. Alongside its main application for wall design, it can be used for landscape tiling or sculptural interpretations with random reduction of the number of bricks. 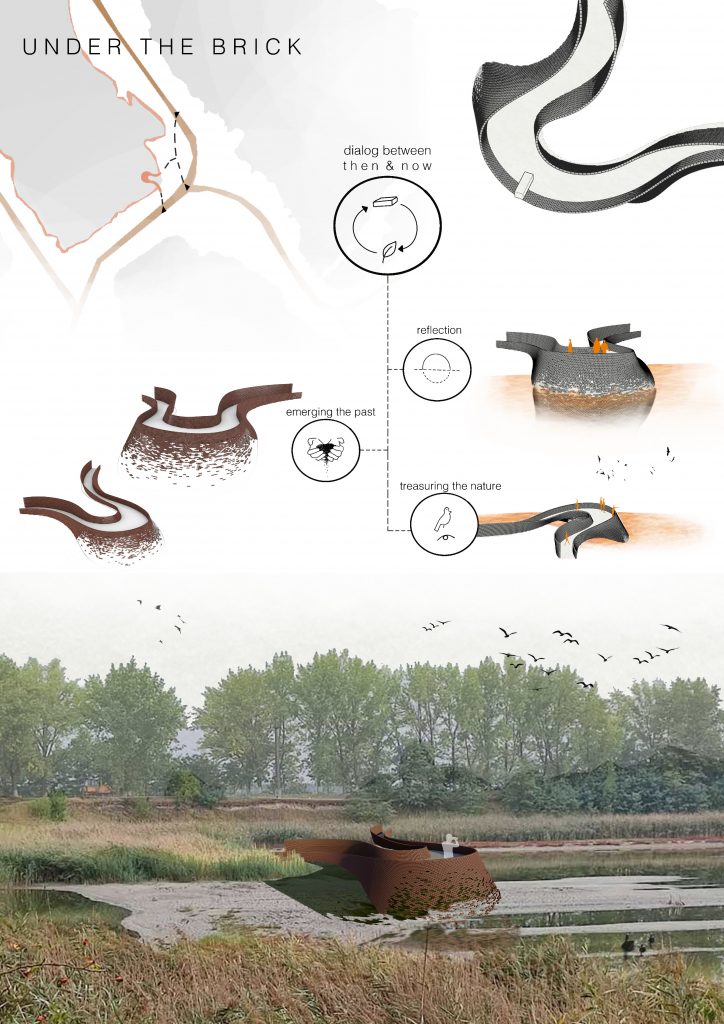 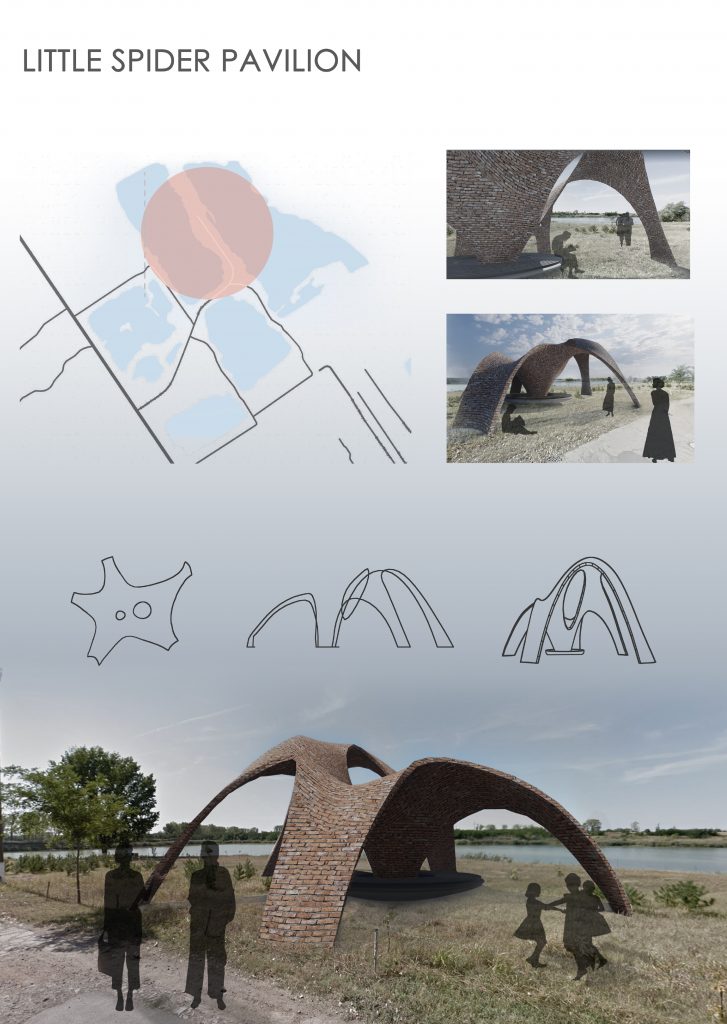 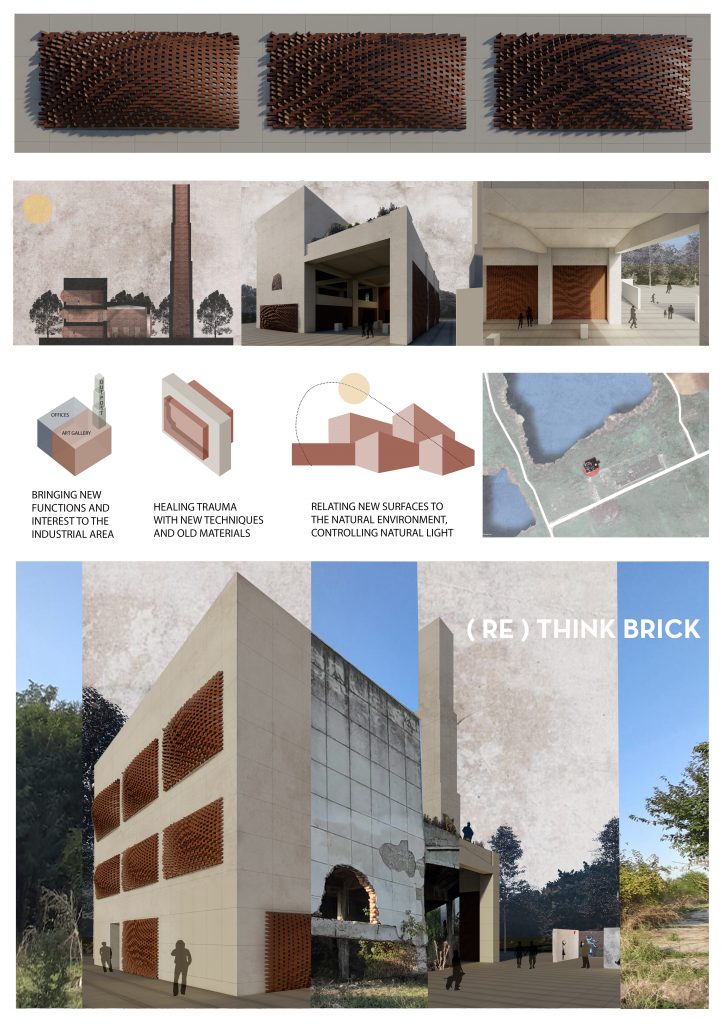 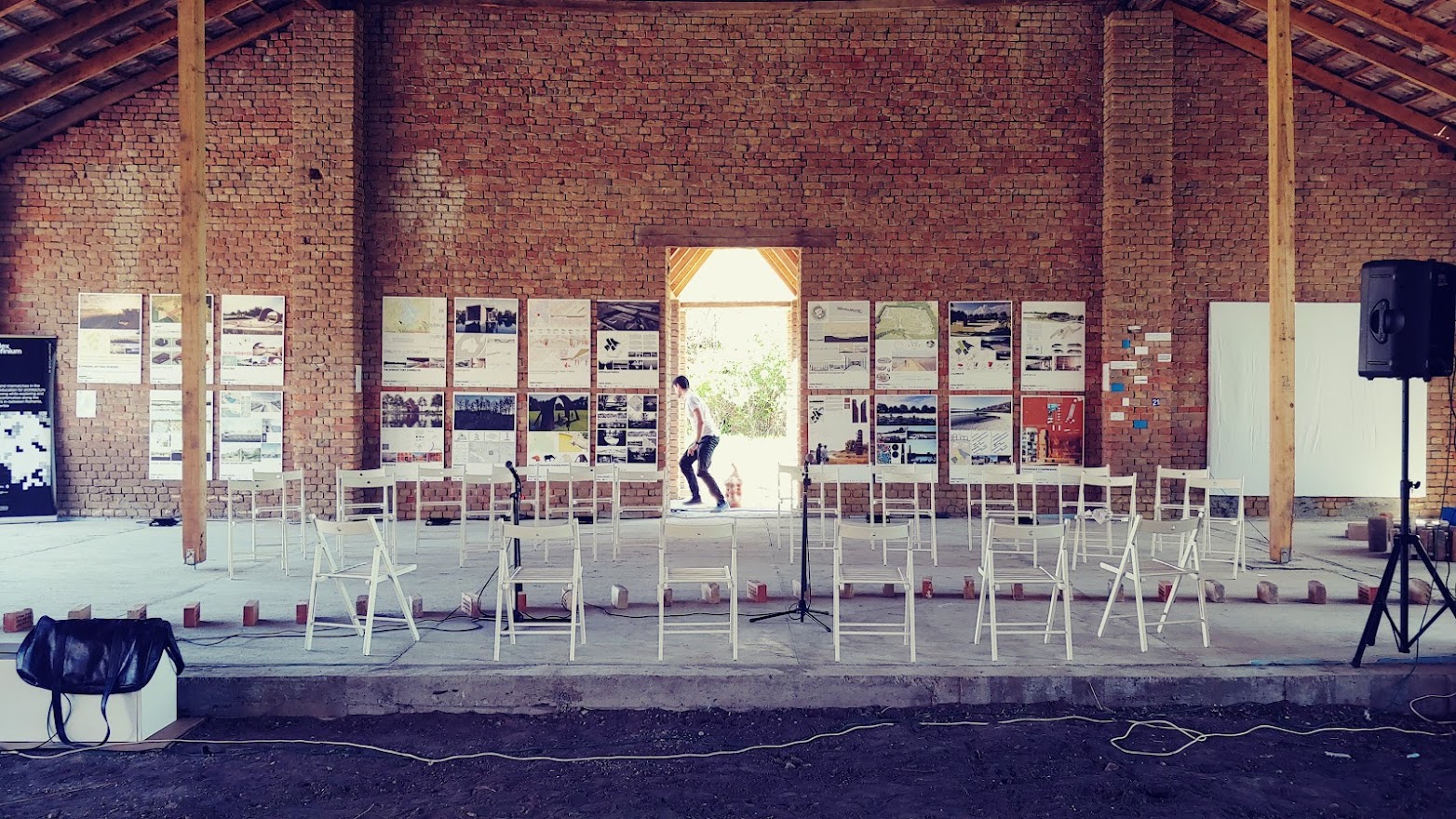 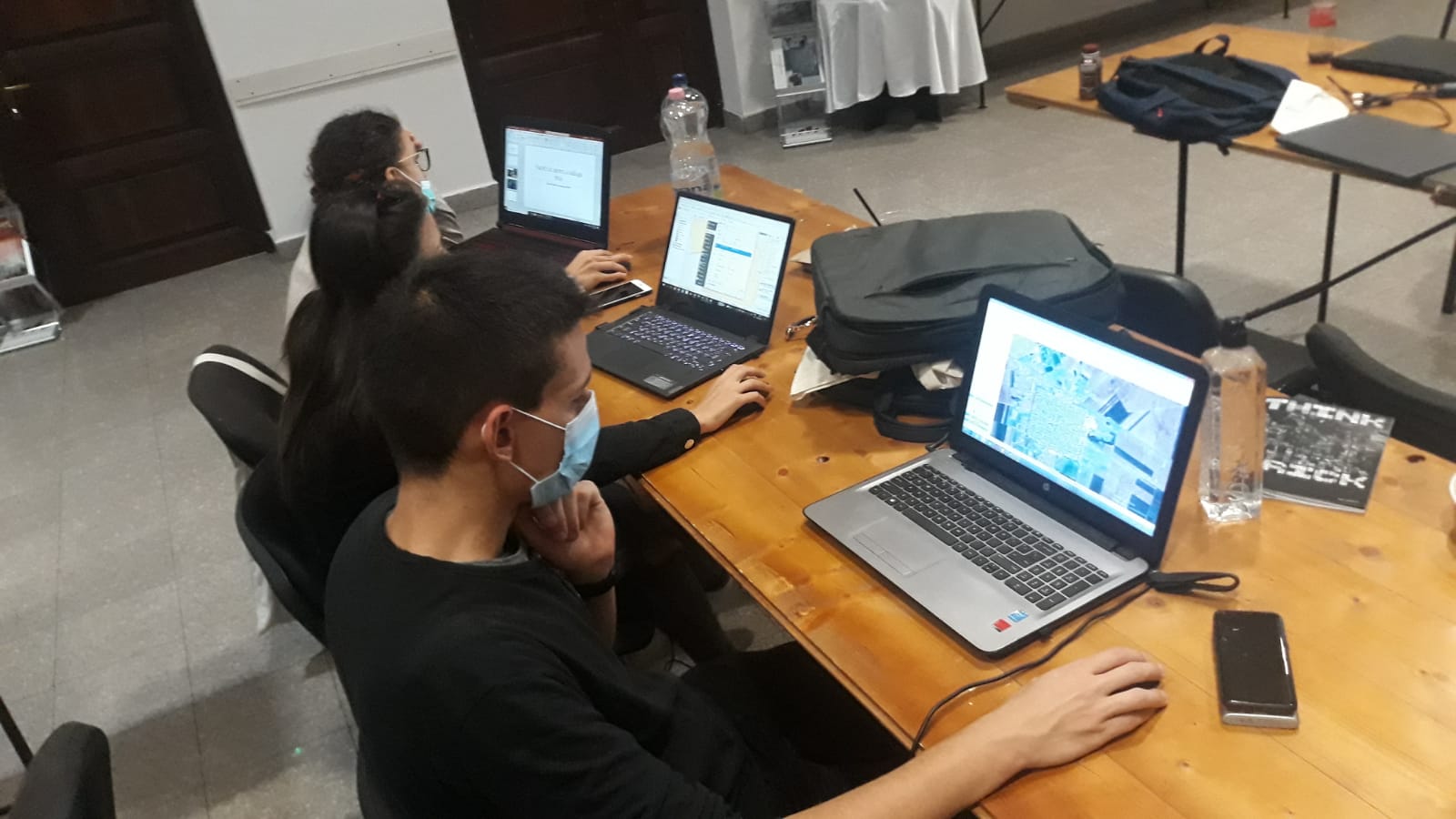 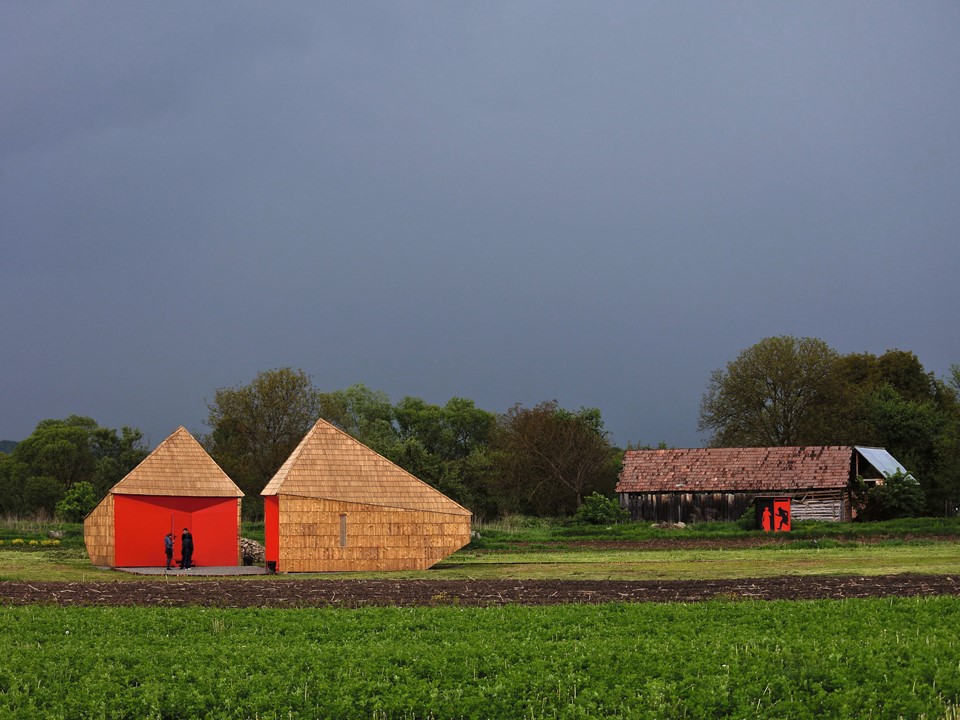 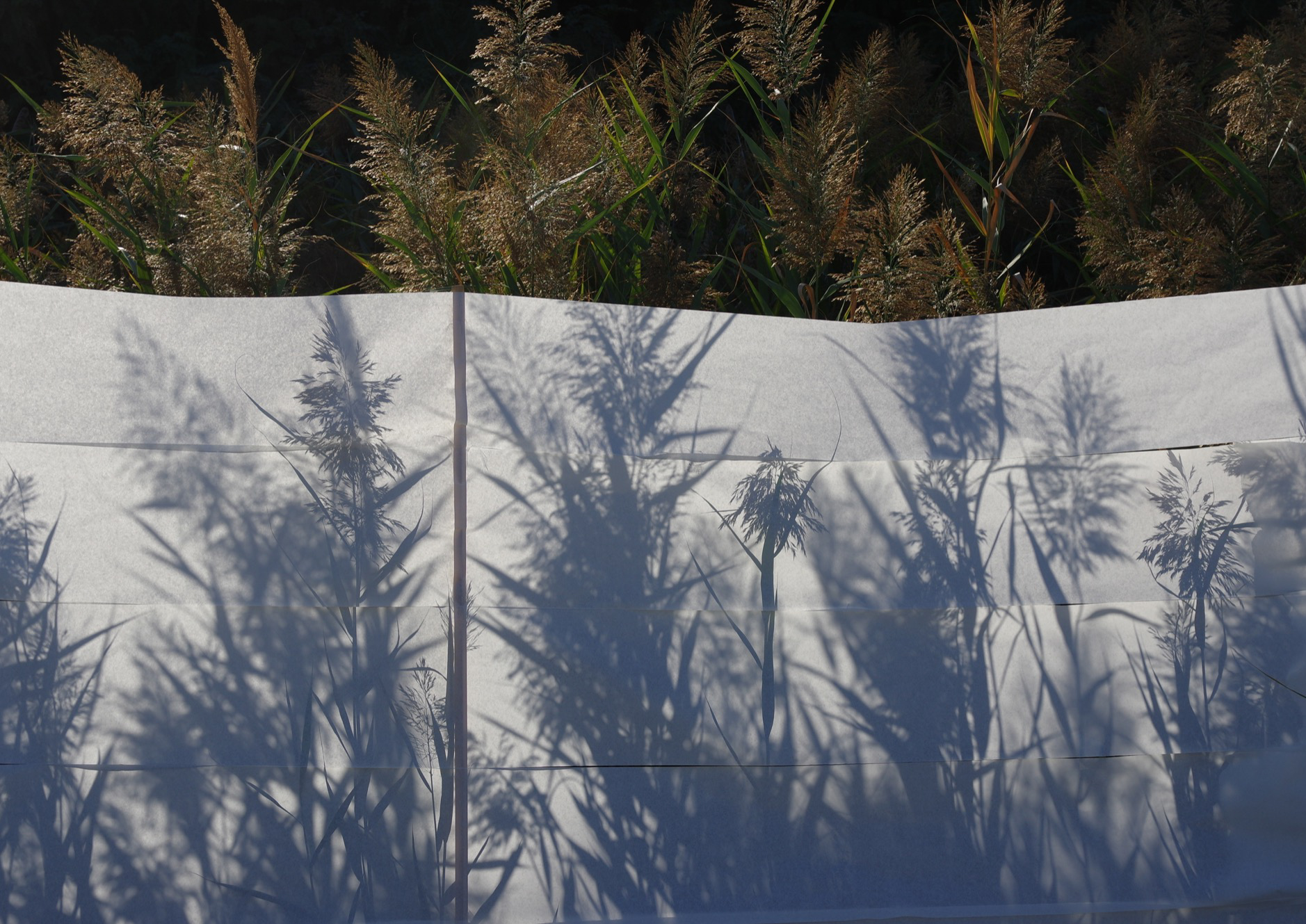